he Touch Panel PC are ideal for various industrial applications and are flexible and versatile. The intuitive operating possibility with multitouch gestures by using the capacitive touch technology, is very intuitive and much more efficient than traditional PCs with screen, mouse and keyboard. Processes within the company and in production can be handled more efficiently and with less effort. This series has capacitive touchscreens, also known as PCT (Projected Capacitive Touch). A major advantage of capacitive touch screens is that it can detect multiple touch points and thus inputs simultaneously. Our units are depending on screen size of the 2point, 4point or 10point version. This can use, for example, gestures such as pinch gesture for easy zooming with two fingers for the control and operation by the user. Even the control of several machines by different individuals from a single screen is possible.

For easy installation on existing VESA mounts, all devices are equipped with a VESA-preparation on the back cover.
Depending on the use and the required performance, different devices and different processors are available. They range from the very compact and inexpensive, fanless processors of Intel Atom class to the high-performance multi-core processors of Intel Core i-series. In addition, all devices are modular and can be expanded according to individual requirements with memory components, hard disks and various interfaces and components.
As operating systems different Linux distributions and Windows are supported.
For the manufacture of our Panel PC capacitive series, we use only high quality components that are housed in a robust and protected housing. The housing has a very slim and compact design and is surrounded by a high quality aluminum frame. If necessary, we also manufacture custom device models even in small quantities.

Find your touch PC with resistive touch technology in the desired diagonal and CPU performance. Suitable for many different industrial applications. 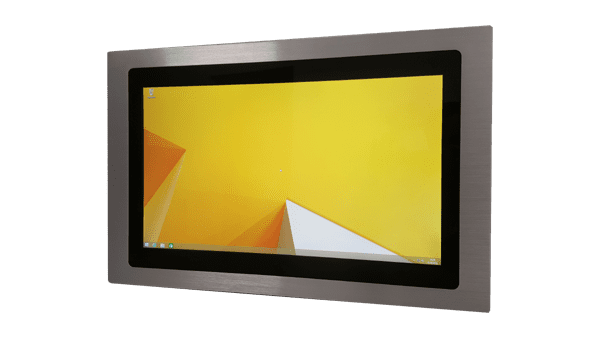 Products and components from customer samples, exhibitions or EOL (End-of-Life) with 24 month warranty.